I wish I could honestly say I was humming the Beatles “Revolution Number Nine” while skating my ninth A2A but it just didn’t happen. Though I can say that nine times is the charm. What with a 14mph tail wind and a decision to just skate to finish and the clock be damned; I had the easiest time I’ve ever had on the roads of Georgia. OK, in some respects it was the hardest time on the roads of Georgia because man were some of the downhills rough. Now you would think that flats and uphills would kill you when the road if rough, well how do you feel about 30 mph plus downhill and the road surface has you bouncing so your glasses are falling off. OK, so I exaggerate, but that’s why you read my posts, isn’t it? 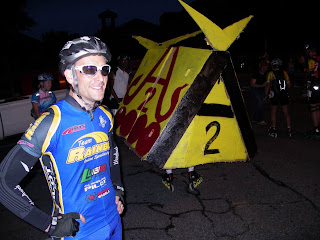 The race started off in typical fashion, Eddy was wearing a Tai Barn Costume that he raced in for the first 10 yards of the event. This is really my kind of start, the gun goes off and everybody waits for the folks in front, no hurry, no worry. What kills me is that first hill out of town, there are skaters all over the road, too early for pace lines, and we’re going fast, my wheels are humming, I’m not awake and the road keeps getting steeper. About two miles out of town we make a left hand turn to a small climb and I’m starting to breath heavy and I haven’t even started to skate. I’m thinking, “How can I ever do this? I’m already tired!” Then things calm down and we get down to some skating. By this time folks have found their pace lines or are moving a bit faster to catch up to one. 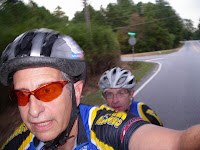 So if you’ve read Larry’s great account of his race you’ll remember that early on there is a two-mile winding downhill where your speed continues to build and you have no clue were it will end. Larry’s description gave me a chuckle because we flat landers have no experience on real downhills and with this one coming so early in the race, with the pace lines long and the speeds high, it sends heart rates soaring and makes most of the other hills (bigger then Big Granite) seem downright manageable. Well I took that hill with plenty of trepidation as my boots this year are not customs, and subsequently fit less snug. I find it takes three or four hills for me to get use to the speeds and relax. Try it sometime you’ll see what I mean.
Funny thing, the miles didn’t seem to affect me this year, sure they hurt but thanks to some talk with Jan I was not cramping. (Thanks Jan!) When parts of my feet started to hurt I changed my foot work, when the pack moved too slowly up hill I found a way to slowdown. I did have to skate a very smart race though. See I’m on 100’s and most everyone else is on 110’s. So they would move slower uphill and faster down. So if I wasn’t in the middle of the pack starting down, I’d be playing catch up on the swing back up. Believe me, I had plenty of time to figure this out.

There were less police at intersections this year, but at the spots were it really mattered they were there. In Atlanta there was some really rough road for a block or so which almost brought me to a complete stop. As always, the finish line is a party of its own with everyone just happy to be still standing. 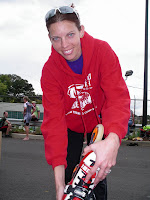 Afterwards the feeling of accomplishment is unparalleled to anything else I do, and the glow emanating off of first time finishers is unmistakable as they enter into an elite family of skaters. Oh, and it always helps to have attractive help with your boots after an event like this. Thanks Jess!

Soon the glow wears off and one notices another unyielding thought. "I’M HUNGRY!" And I knew just what to do about it. Three miles from the finish I was stood up by the smell of Bar-B-Que and the smell did not disappoint. Fox Bros. is along one of the rougher parts of the route and as we sat there lapping up the sauce, skaters continued to struggle by still trying to get to the finish line. I’m not quite sure what they yelled back at me as I sat on the patio with my drink and my sticky fingers. I’m sure it was well wishes.

Finally, as if that wasn't enough, here is a video I shot along the way.

Posted by bobarazzi at 1:17 PM