Out There Solo for 45 miles

With Duluth coming up in two weeks and A2A three weeks after that I couldn't see being able to organize another long skate up in Rockford; soooooo. I took to the North Branch trail all by my lonesome this morning. The big difference between many of my long skates and today is my need to pull the entire way. Normally I would endeavor to skate with at least one other skater as my height, 6'1", makes headwinds very trying.

Cale Carvell mentioned after our 60 mile practice that no matter how long you're skating that last half hour, that last 3 miles are always the most trying and today was no exception. After almost 3 hours on skates I hit the south trail head, turned around and knew that the last 7 1/2 miles back to the car would be into the wind. While more than half those miles were in the woods, half would be out in fields exposed to the wind. Overall I averaged 13.5 mph over 45 miles, that's with stopping for busy streets, stop lights and three brief water stops. That also includes almost hitting two young deer who didn't know what to make of a guy on skates and only just at the last moment turned to run across the trail, but each time they pulled up short and changed directions. Lots of fun in the sun.

OK, now to rest the feet and the legs and get ready for the big show in Duluth.
Posted by bobarazzi at 4:04 PM 2 comments:

About that 60 mile skate 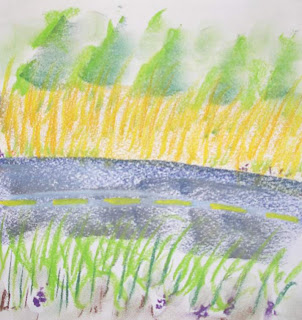 The team organized a distance skate out northwest in the rolling hills of Woodstock and Hebron; pronounced in Illinois as He-bren. Three of the four team members who live out that way, Marcy, Kirt and John put together roughly a sixty mile route through the county highways and byways of Illinois farmland. Funny thing about Illinois, if you go to the extremities of the state you can find hills. Yep, we found hills alright, some where long newly paved down hills of more than a mile. Others were poorly paved grueling up hills. Everyone seemed to be suffering a bit in the foot arena by the last few miles. I was even suffering a bit of mental doubt about tackling A2A again this year. But I kept telling myself that these skates will make it all the more manageable come early October in Georgia.

Besides the fore mentioned team members Cale, Stevo, Tom G. and Andrew came to skate. Andrew on 3 hours sleep. Needless to say Andrew being the newest skater in the bunch managed only 30 miles, but in that he achieved a lot. I think he learned more about pack skating and his limits today than he could have at any other practice. Tom showed that he is a monster of the distance skate and Cale began to find the thrill in skating all day long.

As with most team events, the post race festivities where as enjoyable as the skating. John grilled burger and brats and everyone contributed brews and salads. I knew I had to eat afterward but the body wasn’t much up to the digestion process. That second sandwich sat pretty heavy.

The odd thing about these long skates is my legs are so-o-o-o uncomfortable for a few hours afterward. I’m exhausted, but there's no comfortable position for my legs, so there's no sleep. By tomorrow I’ll be planning the next long practice. A2A, here I come once again.

BTW: The image is a chalk pastel reflection of what many of the roads looked like today.
Posted by bobarazzi at 7:18 PM No comments:

A funny thing happened on the way to a 60 mile practice skate. 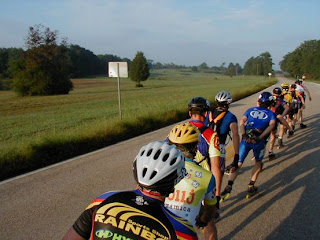 Just a short thought. I posted a notice to the team about organizing a longer skate instead of our intensive shorter practices and funny thing. Nobody replied. I guess that showed me.