By more than seven minutes

What a day for racing. Saturday’s 13th “running” of ’s Northshore Inline Marathon featured a modest tail wind and cool yet comfortable temperatures. Coming off of two sub-par years, I was determined that this was going to be the year to once again get myself into position to metal. Of course for me that means age category metals not pro, elite or open. As my weakness has always been getting off to a good start I decided to ignore the odd-ball, chip-to-chip timing scheme used in and line up at the front of Wave A and try to hang on as the rabbits zipped passed me. Margo Carvell lined up with me as did John Silker.

It was a good strategy as I found myself close to the middle of the lead pack a mile or two out. However, the road surface is rough for the first six miles or so and neither Margo nor I had yet set up a rhythm what with all the shifting going on, so at times she was five of six skaters ahead of me and or I ahead of her. At about mile four John Silker came steadily up the left-hand shoulder with John Mclinn in tow. I jumped in between them and we picked up Margo and quickly we were setting a solid pace. Somewhere in there Mclinn dropped off and the pavement smoothed out. Silker and I became separated and I spent the next few miles in the main pace line. We were at this time still about 100 - 150 strong with much slinky action working to tire out those of us in the middle of the pack. For a good part of this time I was in behind a female Flanders skater who seemed quite capable of letting the gap grow before she chased it down. I was wearing down mentally with the accelerations and was very glad to once again see big bull John Silker steadily making progress on the left. He gladly took a spot in front of me in the pace line and proceed to ignore the gaps and simply and steadily closed the gap each time, helped at times by impatient skaters behind us who would jump into the gaps as they opened.

John and I were of the same mind by this time, around mile eight, every second or third time the line would collapse on itself and slow, we’d move out and move up without having to change our pace. As the line would getting moving again, we’d jump in 10 to 20 skaters ahead of our previous place. At some point it became clear that the hand on my back was often Margo’s. Though I rarely saw her, she John and I skated as a unit for almost the entire race.

Very few times during the race did I feel like I wasn’t going be able to keep the pace, even though I was skating at close to my maximum. My average speed over the entire 26 miles being just shy of 21 mph. Besides the awesome experience of constantly juggling positions with 75 - 100 other skaters for over an hour the race was relatively uneventful - that is if you allow an hour of pure exhilaration to be labeled uneventful. I saw only one spill near me and only clicked skates once. That once was with John, when I tried to move in behind him and cut it too close. John is so big I felt like I simply bounced off him. He didn’t miss a beat.

At the finish, Margo took off up the final hill with me then John in tow. I caught her on the downhill as I continued to skate down, however Margo tucked in behind another rabbit and was out of the sudden headwind as we came around the convention center. I played it safe and took the turn wide knowing where the good pavement would be. I then turned on what I thought was a sprint but the big bull wasn’t finished. Silker came up on my right and I didn’t know where to look to find any more leg speed to reel him back in. 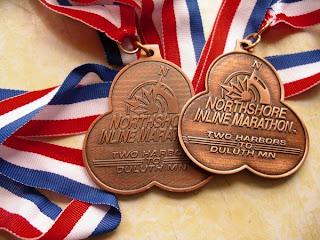 In the end John beat me by about 10 feet, Margo had me by a second, though the chip-to-chip timing chances those results slightly. Overall I am elated to come home with a time of 1:15:16, as the title says 7:30 faster than my previous best. And while I did not meet my goal of first in my age group I was 4th, and in that is still medal territory. But wait there’s more! Team Rainbo won the team challenge by 10 minutes over the second place team so I come home with two medals, one being that coveted first place award in the Team Challenge. What a weekend for racing!