The Mysterious Case of the Disappearing Race

One more Big Granite under the belt and one more year wondering both how this race stays alive and how in the world did it ever end up in the middle of nowhere? Sorry Ashland fans – adjacent to the middle of nowhere. The answers are fairly simple; the race is dying and this may have been it’s last hurrah. As for its location it seems that nine years ago a gentleman in town thought is was a good idea, he liked skating and he knew how to make it happen. As things would have it from that beginning when over 500 skaters braved a black bear sighting on the course the race has been shrinking ever since. I’ve skated 6 of the nine Big Granites and have looked forward to its challenging hills, both up and down almost more than any other race. Next year however, without an angel, Big Granite may be no more. With attendance at an all-time low, roughly 75 skaters, the death knell is ringing. But there’s plenty of time to get blue in the face, this year’s trip up north was still just as much fun as any trip to Duluth.

While the weatherman was being very unfriendly to the Chicagoland area with floods and hail and power outages, we headed north into ever clearing skies. As the hours rolled on Jim M. began to get the hang of how fast he needed to move so as not to be left behind during our pit stops. By the time we reached Ashland the skies were clear, the wind gently blowing, and the temps were about 80. We first stopped in at race central to pick up our race packs and got the bad word about the low attendance.

Next it was off to see whether my motel pick would make me the brunt of every joke for the rest of the weekend. Would it be the cat-piss motel or wouldn’t it? Well the office was anything but hygienic smelling, what with three dogs running around, but the rooms where fine, though the mattresses were the loudest I have ever slept on. You know that race night toss and turn thing we all do? Ear shattering to say the least, earning the motel the new name of “Crust Motel” Good coffee but very short on hospitality when came to checkout. 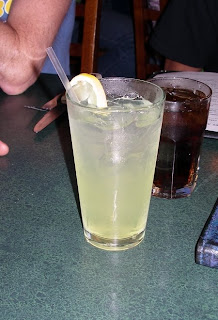 Once again this year the team dinner was rudely interrupted by free alcohol. Last year it was a round of pink “wheel sucker” shots, this year a couple of tall heavily laced lemonade “wheel suckers.” Once again the sendees had no idea who the sender might be. Though half the way through these drinks I’m not sure we cared who the f sent them. Actually I can’t remember anything else about dinner.

Yes, Big Granite is a tough course and while the pavement is mostly in great shape those first few miles are spent climbing and as always my body was yelling at me all the way to the first left hand turn. Thank the wind gods, the head wind is now only a quartering head wind yet up another hill or two we go ‘til it seemed the body just wasn’t going to make it. But there we were suddenly at the second left hand turn and at the top of the course. We passed the offered water bottles without stopping and headed down wind and slightly down hill. The legs started getting into the swing of things and it was just about at this point I noticed that Ken Huss and I had dropped Guy at an undisclosed location and picked up Cheri, a WI skater I believe. Ken, Cheri and I took pretty much equal turns pulling and most times when the leader pulled off they were spent and needed everything they had to hang on to the back of our small pack. 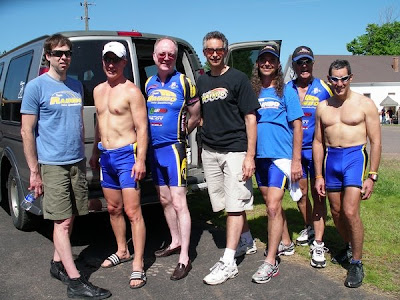 Ken led us into the big downhill and accelerated a bit going into it. I took it easy at top knowing that Ken wasn’t going to go too far without two thirds of his pack. As is often the case I was a bit more stable the second time down the hill. Most of the rest of the race was fairly uneventful right up until three young bucks caught up with us with two miles to go. Prior to that our group had swollen to five as we picked up two skaters a guy and a gal, with Cheri, they were the number two and three women in the pro/advanced race. The young bucks, leaders of the fitness category, promptly took over the lead of our pack and start playing leader games, standing up, pulling out and jumping back in, only they lacked the talent to play these games safely. Well one of the bozos jumped back into the pace line knocking the other gal in our pack off her skates but thankfully into the grass very likely changing the outcome of the women’s race.

The field sprint was as surprising to me as anyone. Over my last few races I’ve had a bit of sprint building in me and I was able to hold off most challengers at the finish line for a fine final 100 yards. Though I have been cutting it a bit close on my goals; I said I would be fine with anything under 1:30; remember Big Granite is a tough course. When I made it over to the results board it had me at 1:29:16. Good thing I sprinted at the end or I wouldn’t have made my time goal. The day was essentially won by Rainbo’s own Gary Blank. Seemingly out of nowhere, the unknown Gray sits at the front of the lead pack, pulling for most of the race and in the end he wins the field sprint to take second over all. Great job Gary.

The drive home was mostly uneventful; the usual 90 mph drive time lengthened by the van slowing down to a sane and sensible 85. The usual stories from Cale with the usual response from Jan and Guy, the eating of the skittles and the super human bladder control of our fearless team leader.

What then can be done to save Big Granite? More skaters with a love of good skating. Come on skaters, let’s help them make it a full ten years. Hope to see you there next year.
Posted by bobarazzi at 9:04 PM No comments: