This was a race of small victories. In my position, one of not skating very much, like not at all, all I can hope for when I skate are small victories. The race started, as always, with my less then aggressive start, which this day was accentuated by lining up next to Tom Grosspietsch. Tom squirts through a crowd like a… like a I don’t know what. All I know is after 20 yards of avoiding flailing arms, legs and skates I look up and Tom is disappearing in the crowd 10 yards ahead of me. As the opening closes down in Tom’s wake I settle into my early race routine, playing catch up. I’m soon in the pack with Tom, though he’s in front and I’m near the back. Today seems to be the day when racing on my worn down 100’s finally takes its toll. I’m working too hard to stay with this group and I’m sitting in their draft.

Well I’m toast as we hit the little square of rough pavement out at the far end of the course. Turning back onto Central I’m once again playing catch up as we approach the uphills. Bye bye pack. A mile or so down the road and John Silker’s pack, with big German Horst in it picks me up. It wont be ‘til the second time through this stretch that I realize what it is my skates are slipping on. The road is full of frogs. Seems we had so much rain the frogs came out to play chicken with the cars and by the looks of things, the frogs lost.

Back to racing. Kris K. and Colum are also in this pack and looking strong, as well as a young 20 something gal in rec skates. My how I wish pack skating wasn’t a learned skill. She really was distracting to skate behind, you know the stop-start, pull out, pull in technique that so wears us old guys out. (wink wink) Anyway the energy I expended there I saved by drafting Silker and Horst, both giants among men and great skaters to boot. 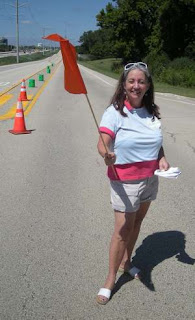 As always the 2 left-hand turns inside AT&T are awesome and a thing of beauty if you take the right line. The crowd at the roundabout was very encouraging. Without being able to hang with the pack I had my sights on I will gladly settle for having skated a good tactical race, not pulling too much and rarely where I didn’t want to. All leaving just enough at the end, even when the sprint started so far back that most of the pack didn’t have that much sprint in them. It’s a rare sprint were I pass half of those who take off in front of me. I know for a fact that Colum had one one thousandth of a second too little sprint left as I busted my butt to catch that Rainbo jersey in front of me and with nothing left, I can’t say hawked, I stuck my left foot out and it hit the wire first. I swear Colum crossed the second wire before me; that was how close it was. The timing went three decimal places down to separate us. Either way I was just very happy to break 1:30.

Little victories, especially at the finish, loom large. Thanks to all the volunteers, sponsors and organizers for another great weekend of racing. See you next year for sure.
Posted by bobarazzi at 8:02 PM No comments: