Apostle Island Inline Marathon
As evidence that this was not the usual Rainbo trip to a race I present this evidence; over the 800 mile plus trip I changed seats in the car twice; blasphemy I know, totally unheard of in the team van. Worse yet, we made stops, twice in one town, namely Phillips, Wisconsin. 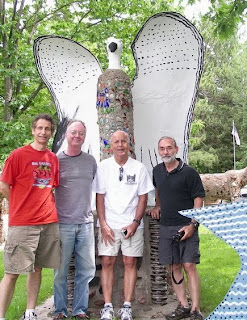 First at the Fred Smith museum of concrete art were we tried to enlist a good tall skater to lead us out on fliers. Second to eat a fabulous meal at the Crystal Café; yes we stopped to eat, unthinkable. I had the Fish Fry and the beer battered fish was the lightest most delicious I’ve had since I was on the Tamiami ("tammy-ammy," it rhymes) Trail on the West Coast of Florida. Nothing was as it should be.

To add insult to injury we were forced to walk all the way across the parking lot to get from the hotel to dinner were the Prime Rib at the Steak Pit looked every bit as good as the Walleye. How was I supposed to decide? As far as accommodations, I’m putting in a complaint with the manager of the Super 8 in Washburn because the queen size beds were so comfortable I had no excuse not to just go to sleep and not wake up until the on-time wake up call. In the morning the roads were clear of traffic, the parking ample and the ferry boats were so on time there could be no one but myself to blame if I didn’t have the perfect race. Something was terribly wrong; I needed an excuse in a hurry.

The heat and 35 mph winds of the day before were gone and from what I could tell the road surface was smooth as glass. Nothing there. The coffee shop on the island opened early and Jim got my order right. Nothing there. It was a bit chilly out but the rec center was open and the couches were comfortable. Nothing there. This was shaping up to be one of the worse races in resent memory.

I started grasping at straws for how I was going to blow the race. Maybe I’d leave my chip strapped onto my bag and only notice it at the starting line. Nah, nobody would believe that; would they Jim? Jim (aka the dog killer). Maybe I could change my registration to another much tougher category and complain about that all the way home. Wait a minute; I was already signed up in Pro/Advanced Veteran; that was it! There’s no way I’m competitive with the studs in the Pro Vet category. OK, I could relax, I had my excuse all lined up.

The start went off without a hitch, as Herb Gale wasn’t there they only had to sing the “Star Spangled Banner,” none of that “Oh Canada” stuff. And it was time to go. With the start/finish line on a slight down hill with a 90 degree left hand turn about 200 yards up the road only the leaders got a true jump off the start. The pace was sane and sensible until the first step after the turn. Then all hell broke loose and if you weren’t quick on the turn you had to hit the after burners as the big dogs were booking. As it was Ken Huss, a Duluth skater named Tim and I burned a fella out at the front of our small group as we encouraged him to close the gap. I saw immediately when the gap started to widen but I didn’t have it to jump out and quicken the pace. So we let the group ahead go and settled down into a smooth but fast pace. The left hand turns came and the head winds picked up and the road started it’s little undulations and the legs started to tell lies, all about how they might not make it and hey, back off a bit and the like. About this time we caught up to Chris Wright and she was having none of it once she was rested and we kept a good pace.

A funny thing happened on the way through the finishing area, first time through I was pulling while Iris was snapping our photo. Second time through I was in the same position and Ken went on a flier saying “no way buddy, this photo op’s mine.” I let him have it. Good thing I did to for as we were closing in on half way through the third lap of three the lead pack from Rec/Fitness catches us. No way this is a Rec/Fitness group, this is 30 of the guys from the A group in Duluth. They are leaving a few gaps in the line and I jump in. A big draft is a beautiful thing. Ken didn’t have the legs to make the transition but Tim and Chris did. The pace was fast and there was a bit too much position jockeying three miles out but we were flying and I was smiling. Of course now I’m thinking the excuse is custom made. “Oh I would have been two minutes faster had I signed up in the right category.”

If there is one thing Rainbo skaters have over others skaters, even those of us who neglect to practice, we climb and we turn. The largest of the small climbs on the course is just before the turn to the finish and it was there that I moved up on 30% of those in front of me. And I took the turn tight and that downhill finish will make a champion of anyone. WOW! It sure is sweet kicking downhill. The times were fast and the smiles broad. This is really one not to miss. Now why was I looking for excuses? 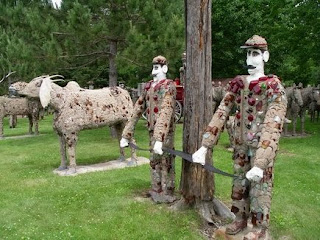 On the way back we tricked Jan into being in charge of the music instead of driving then we just kept telling him to turn it down. Worked like a charm. We ate our lunches like men this time, in the car, on the move and I didn’t almost get killed until I was on the final block to my house, when a car blew a stop sign a second before I drove through. Timing, it’s everything in life.
So close that gap, you may not get another chance.

Posted by bobarazzi at 7:57 PM No comments:

I have to say I almost always have something fun or funny to relate after a race, but this one was something else again. After driving a touch of the course prior to race time I was wondering if I was the only one who thought they heard something about this being a flat course. I now think what was said was this was a “relatively” flat course. Relative to the Rocky Mountains, this is a real flat course. Well thank the heavens that at least the pavement was in good condition. What’s that you say? You fell in a tar snake? Well the road was in “relatively” good condition. Never mind all that, at least it’s May in Wisconsin and the temperature was cool and refreshing. Wait, what? The temperature was in the mid 80’s with equally high humidity? Yep! It was the perfect storm of conditions to make for a challenging beginning to the Midwest outdoor season. 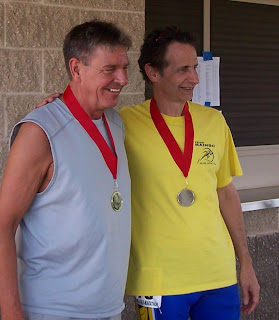 All joking aside, this is an awe-inspiring event, three days of racing, of which I participated in only one, with a star-studded field of skaters and it is already on my calendar for next year.
Posted by bobarazzi at 11:08 AM No comments: