This weekend’s 3rd running of the Chicagoland Inline Marathon proved that races can improve and grow year after year. This year’s course was perfected into three challenging laps of rolling hills and interesting twists and turns. To add to the excitement and spectator fun, the pro’s skated separate from the advanced and rec/fitness skaters so we mere mortals got to see what all the shouting is about.

For me the day started on a bad note, and a bad joke, about a week back I suffered a muscle spasm that saw me with a weak back that I’d had since about a week back. I almost pulled out of the race during my warm ups as it felt like I would never make it up the hills. But an entrance fee is an entrance fee so when the racers lined up there I was ready to go.

I was overly cautious at the start but almost immediately found I was not hurting so I started to move through the mob hunting down the usual suspects. I sensed the first turn would have the still compact group slowing down so I choose that moment and the long downwind stretch as my chance to move forward. This meant I missed the break of the lead pack, but since I seldom hang with the young guns for long I let them have their fun without much regret.
For the second time this month the hills were my friends, at least more so than for many other racers. I found myself almost resting as the pack slowed way down unable to find it’s stride uphill and into the wind. I am extremely fortunate that the hills were easy as I skate on 100’s and most all my competitors are on 110’s; so I work harder in the pack on the flats and I have to skate to maintain speed on the downhills.

Two thirds of the way through the first lap we reached the two fast left-hand turns and I played a bit of Tour de France with the pack and maneuvered two fellow Rainbo skaters to the front with me to lead us through at full speed. I knew if the home team led the way we would avoid any unnecessary braking though what are really two exhilarating turns. With that success behind me I seemed comfortable playing the percentages throughout the rest of the race. Moving forward or backwards in the pack to gauge when I would have to pull and where I wanted to suck wheels. I did once or twice get gapped and more than once barely clawed my way back to the pack.

Then it all came down to three skaters. Near the end of the third lap there was a break away just as the course comes out of AT&T, turns right onto the street, and then heads back into AT&T for the run to the finish. I felt we couldn’t be caught or catch anyone and Ken Huss and John, the other skaters, seemed content to battle it out with each other for the lead. I sat on them waiting for someone to make a break for the finish and when it came I answered on the outside. In the long sweeping right-hand turn we were skate to skate, but at the last the road straightened and I was going just that much faster to win the sprint. As it turns out, the three of us were all skating for position in the same advanced age category. This year marks a repeat of last year’s first place win, so history does repeats itself. A nice race to win with much help from others in the advanced pack, old and new friends alike
Posted by bobarazzi at 8:06 PM No comments:

New York City... Skyscrapers and everything

Well, I came to NYC with hopes of squeezing in a bit of skating between meetings at the 100th Anniversary NAACP Convention. So naturally I brought my rec skates thinking "NYC, no big deal; a little city skating, I'll be better off with the heal brake anyway."

WTF? This town is not flat, certainly not if you're skating Central Park. I really needed to stop and tighten my skates before heading up the second hill in the park. Anyway, I brought my camera and made a little video for ya'll. Enjoy.

Posted by bobarazzi at 6:06 PM No comments:

I knew I was in for an adventurous 24 hours in deciding to travel to the Badger State games with Jan. With Jan driving! Jan who comes equipped with a half inch thick pile of MapQuest and Google map printouts, plus “Gert” the talking GPS on the dashboard and still manages to need at least one 180 turn to find the correct highway to Appleton, WI. I think the driving had me lulled into thinking the wildness was almost at an end when close to the race site we drove through a wind farm. Those big blades kept turning and turning and turning… so beautiful. I was mesmerized, not thinking that wind turbines meant wind, lots of wind, constant wind. I should have realized we were going to be in for a wild race the next day, but the blades kept turning, turning, turning…

Surprisingly we made it to Appleton in great time. The hotel does the memory of the “Crust Motel” in Ashland proud and I’m pretty much off the hook for that one.

Race morning and the forecast said “breezy.” Breezy like a Wisconsiner says the course is relatively flat. HA! The wind was steady 20 mph across the course with gusts to 30, Jana was knocked off her skates when a gust struck just as she hit a small hole in the road.

The race started well and I was moving up on the second pack. I was upwind of the main line of skaters and as such I was blocked from the strong cross wind. Once I pulled into the line, a group just a few skaters up with Ken Huss and Margo made a move and the guy in front of me didn’t answer. I pulled around in an attempt to close the gap and that’s when I noticed the wind. I must have pulled for a mile thinking only one skater was behind me. I waved him to take the lead and found I had been pulling a line of eight or more. The last thing I heard as they dropped me was “Nice pull.” Oh those fatal early mistakes. 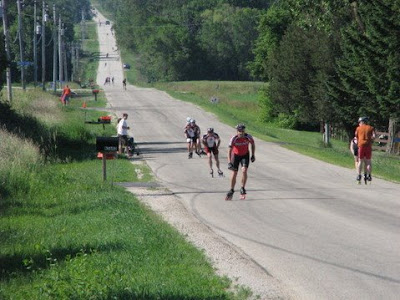 The new Badger course includes a long climb of maybe a mile and a third. The climb however must have been the equalizer, as Margo and Ken finished only 3 minutes in front of me and I skated solo for the last 8/9 miles. First time up the hill I took it easy and totally dropped a strong skater who on the flats was putting serious hurt on me. I coasted all the way down waiting for him to catch up and that is where a pack of four women caught us. The next few miles saw me with rejuvenated legs and all seemed fine, ‘cept the women kept the heat on and I soon started fading. I forced myself to hang until the turn home then let the pack get away. I was very happy to see Jana, making up for lost time, a minute or two behind me.

Some crazy ass thought struck me as I approached the hill a second time. From a mile out the hill appears as a wall of road seemingly rising straight up into the air. All I could think was I wanted to do anything but pound out the miles against that wind. I knew that climbing would stop me from thinking about the wind and a sense of relief overcame me. Maybe it’s just time to see the head doctor or maybe it’s all those A2A miles, but I have two or three different hill strides and I just kept rotating through them ‘til the top.

It’s wasn’t until crossing the line that the race director apologized for mistakenly changing the course that morning for a total of 29.9 miles instead of the normal 26.2. Ouch, I knew it hurt, but that made the 1:49 time more palatable. The bigger surprise came when I found out that Rainbo’s own Marcy Turek took first place overall. Beating out the men at their own game – sprinting. Nice going Marcy.

Overall the Barger Games puts on a good event even if it’s not on a course a flat-lander might call relatively flat.
Posted by bobarazzi at 6:58 AM No comments: