A Decade of Duluth

This year’s trip to Duluth came complete with a 10-year pin inside my registration bag as I arrived for the 14th “running” of the Northshore Inline Marathon. The weather conditions promised to be good but I came with no hopes of besting last year’s PB of 1:15 and change, but I get ahead of myself. First and foremost I have to send out dudo’s to my travelling mates, Liz, Herman and Nancy it was a weekend of firsts. Nancy’s first full marathon, Liz’s first carpool experience and my first time bunking with a father/daughter combo. In respect to Liz missing out on the team van experience due to Cale’s entrepreneurial endeavors we tried to make our trip as close to a team van experience as possible, once in our seats there was no changing, there or back. Except for a brief stint at the very beginning with Nancy driving, Herman drove the entire way; I had to pee more than anyone else except Margo who wasn’t with us, and to enhance the experience of speeding through Wisconsin, Herman got a speeding ticket without even speeding. (Cale would really have been.)

We had some really sweet daughter/father bonding all weekend it was a pleasure to watch and be part of. Did I mention that Nancy is Herman’s daughter? Well being his daughter doesn’t inoculate one from falling head first into Herman’s world and they had some very interesting exchanges. I swear the thought pattern the passes for logic in that man’s head could make me famous if only I knew how to explain it. All of you who know and love the Hermanator know exactly what I’m talking about.

We reached Duluth early afternoon on Friday to gale force winds blowing from the east. Most of us wanted to drive out to Two Harbors on the spot and be blown back into Duluth. I was ready to fashion a sail out of my Rainbo wind breaker, but alas it wasn’t to be. By morning the winds were mostly calm though still out of the east. Race time and the temp. was close to 50 and dry. The start of the “A” wave went off cleanly and fast, and in no time lines were forming up and breaking apart as soon as they were stable. The first six miles or so was a close fought thing what with all the skaters still bunched, the road surface being rough and the large number of tar skates.

It was in this stretch or soon thereafter that I’m pulling John Silker and Kris Felstehausen up the left side of the road when 20 yards ahead I spot arms flailing in the middle of the pack skating up middle of the road. An orange jerseyed figure comes shooting sideways out in front of us and in his attempts to right himself he spins around backwards and is looking me in the face. Now, I know this is wrong, you should never be looking into the face of another skater, especially when he is in front of you. A split second later he is down and it looks good for us to move onto the shoulder and get around him, but no, his momentum takes him further and further to the left and soon I realize that at over 20 mph you can skate on gravel, or over gravel. It’s only once you start to slow to 15 that the wheels dig in and you go flying. I’m down, and quickly sliding off into the grass and hello, what’s this, a tree. I’m stopped, I’m up, and so is John and we skating again. John pulls hard and we grab the tail end to the 150-175 skaters still bunched together and then John pulls off and tells me to go on. I found out later that his customs have a funny latch system and he had to stop to reattach a buckle.

I spend a good deal of time working back up the pack as I was sure this end group will be gapped very soon. I mainly work my way forward on the uphills, by stepping out and not slowing when I know the line sag a bit. Success, soon I pull in behind Kris and she acts as if she’s seen a ghost. Frankly, I was as surprised as she that I was back on with the lead group, in fact at times I was within 5 or 6 skaters of the lead but thought better and fell back. 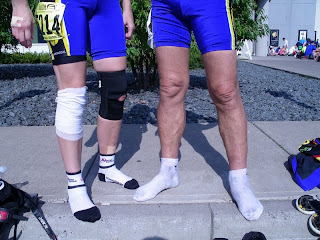 Herman and daughter Nancy, like father like daughter. It's hard to tell who's legs are who's with those bandages.

Well that end bunch never did get gapped. We had a fast pace but with TeamRainbo members and last year’s Advanced category winners Gary and Stevo having been moved up into elite there were no work horses there willing to lay it on the line. Casey from Rainbo tried several times. I saw him up there in the very front but other skaters would take over and slow the pace. From this mayhem soon ensued. We caught the pro women at about mile 17 or 18. Add their pace line, which we had to allow them a clear line, and a motorcycle to the ever evolving lines of 150 skaters and crashes and spills started taking their toll. Most skaters where courteous, but even I moved over on a woman skater without glancing behind me first and had to apologize, fortunately no harm done. I was able to skate with and help Angie Taylor, the overall open female winner. Quite a thrill, great skate Angie.

Needless to say Lemon Drop Hill was a mad house, being boxed in I saved my energy going up and took a good line down and missed the big wipe out as we motored down the ramp onto the highway. My wheels seemed to slip a bit on the grooved pavement the pace was so high. I played it safe in the last tunnel as three lanes of skaters had to merge right onto the one lane off ramp and that may have cost me my finishing position. I was able to move up nicely on the hill to the turn but the leaders where ahead and taking advantage of open road ahead. I took the turn wide at full speed with little or no traffic, but down towards DECC the road was now solid skaters everyone taking their own line. There was little space to do anything but coast down the hill, then taking the two left hand turns wide I was able again to move up. The wind was not a factor at the finish and at least no one caught me. I was two minutes off of last year’s PB for a 1:17:27, and a second place in the late 50’s category.

Of course the almost 80 degree weather in the afternoon after the race made for a great day outside and my evening Rosh Hashanah meal at Famous Dave’s was festive. Thanks Duluth for ten years of great racing. This is always the race I measure myself against. Well this and A2A next month.
Posted by bobarazzi at 6:09 PM No comments: