The Fleeting Flash of Glory or How Far Can You Fall and How Fast.

This weekend’s adventure to Minneapolis and the 2010 Metrodome Inline Marathon contained all the usual suspects, highways hijinks, bad jokes, good food eaten together and some very entertaining racing. I have come to look upon this event as putting indoor skating to bed for the year and the beginning of warmer, drier streets and trails out of doors. Before I put all of that indoor skating to rest however I need to recap Friday and Saturday’s trip in Minneapolis.

Friday evening as the team gathered for dinner the consensus was running 4 to 1 that Kevin would never make it to the Dome in time for the half marathon, which was to be his warm up for the team time trial later in the day. So Cale and Margo were on me to take his place so I’d be “loose” for the real race. One massive iPhone text later from Kevin and the Carvell contingent moved to “Plan B,” I was now going to race for John McLinn in the half instead of the whole marathon, John couldn’t make it but I hope he makes it to Texas instead. If your head is now spinning, you can bet mine was, or maybe that was the martini at dinner.

Leave be said that I didn’t think I’d be skating in the morning when I dropped the troops off at the Dome and went in search of a breakfast. Three pancakes, two eggs, bacon, and an order of potatoes later I show up at the dome to the call to get my skates on. Cale has me lined up to skate the half in about 45 minutes. This should be fun… if I don’t throw up first. Maybe it’ll all be downhill.

Margo is skating the half as well after cheering on Cale in the Pro/Advanced Individual Marathon and is beginning to talk about finishing times. I’m thinking only of trying to finish with breakfast intact. We are among the last to enter the floor and in my gallantry I wave Margo to start first, she declines saying I should go and she’ll catch up with me. Remember this “polite” action on Margo’s part, it’ll play a role later in the tale.

I coast onto the floor and start out slightly faster than the rec skaters getting my legs under me when Margo flies by me yelling “jump on!” Had this been later in the day my response would have been to drop the “F bomb” on her, but at that point I had no idea those words would become the approved friendly greeting for the rest of the weekend. Maybe it was my body language but Margo knew I wasn’t coming so she was waiting for me around the corner. Together we started moving along at good pace; a good pace on an empty stomach, but way too fast for my current condition. Everything passes eventually and since skating seems to help things “pass” more quickly I decided, “let’s skate.” At least my lower center of gravity helped me stay down behind Margo until a few big Minnesotans latched onto us and I could stand up.

We started flying around the track and it was truly mayhem, one guy with us kept calling “outside” to pass skaters on the inside and for the first 15 minutes most skaters thought they were the fast skaters so they were all in against the left-hand wall where we were trying to get by. After one of my pulls, yes breakfast had settled some, I pulled off the lead to get on the back of the line and the guy there sucking my wheels waves me off because we can’t have more then five in a pace line. I “politely” ask him who the "H" he thinks has been pulling him, all while I’m dodging in and out of skaters in Bermuda shorts and quad skaters in tutu’s. Soon we’re paired down to four of us who are skating in a nice tight pack and I’m beginning to enjoy myself and wondering why I thought Margo was just going to go out for a joy ride when one of the tutu’s believes she’s going to jump on with us. She gauges our pass and moves left right into my right skate. I feel a slight bump and then she’s in behind me... falling... holding onto my shirt and falling. I start swatting her off and yelling, not very politely I’m afraid, to let go of the shirt. Oh did I mention I was skating in a t-shirt? I thought this just a warm up. 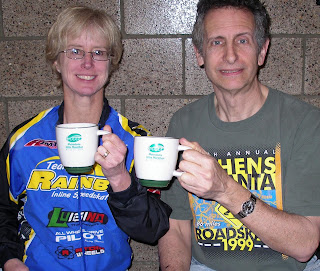 So Margo and I finish, having dropped everyone in our group and laugh it off and go down to cool off and wait for the race. Forty five minutes later or Cale comes over to Margo, hands her a Rollerdome mug and says congratulations, you won. Sure as sh*t our warm up was five minutes faster than the next fastest skater. I get a mug for second place and then realize that Margo out foxed me for the win. She knew that by starting behind me she would be ten seconds in front of me when we finished together. You know with friends like that...

Well glory really is fleeting as our team race was anything but stellar. We verbally abused our pit crew and lap timer, we finished with only four of our original complement of five and we passed only one other team only once, and they were coasting in on their last lap six laps in front of us. But boy were we in the zone. The “FU” zone if you know what I mean.

Many team members achieved personal bests out of the race course, and several came home with trophy mugs. We achieved new heights of personal growth, spitting Tom G. into good Tom and bad Tom and late in the day bad Tom came out in all his glory. Now I have to say this is only a matter of a competitor giving his all for the team, but his all this time was just a little salty. In truth you couldn't say a nicer thing to a teammate after the race then “F*ck you.” We really were working hard out there.

As happens so often though Cale became the workhorse and pulled 30 or more of the 71 laps and man I needed it. Margo may have been the tallest skater in the bunch after me so I was getting no draft. Add to that Cale trying to take me out early in the race and you can see why maybe I’d leave him out there to pull. Seems Cale took a cue from the tutu lady of earlier and cut back into line too early only this time he took my foot out from under me. Imagine trying to hold an edge on one foot on slick concrete. It's not going to happen. About 10 minutes into the race I’m heading for floor screaming bloody murder. I just hate going down silently, for me it all show or no show. Funny thing is the floor really is slippery. I slide to a stop, get a skate under me and I’m up no worse for wear. No muss, no fuss.

Anyway the other teams were very understanding and gracious, only yelling once or twice a lap to get out of their way and adding a "good job" in as they flashed by every other lap. First it was a burden, then a joke, then an “FU.” But we wore them all done, yes we did. We eventually passed them all like they were standing still. Then it was our turn to yell, “On your left.” Well maybe they were standing still just a little bit, maybe they were all finished and we had six laps to go, but we still passed them, everyone of them.

Cale, Margo, Kevin, Tom, I wouldn’t have it any other way. It was a fun day of racing and friendship and that my friends, not the hoky poky, is what it’s all about.

Thanks goes out to Adam Kocinski, the volunteers, the sponsors and the Metrodome for another wonderful event and we hope to see everyone back in the area for the St. Paul races coming up this summer.
Posted by bobarazzi at 7:59 PM