A skate with a very wet beginning and end

When John invited us up to his place for a long skate and to “show us the sites” around Woodstock Larry, Margo, Tom and I had no idea that “the sites” included spectacular lightening, torrential rains and puddles deep enough to dwarf our 110 mm wheels. Let me start from the beginning, at 5:30 Saturday morning the radar was not looking promising, though the forecasts called for only a 60 percent chance of rain. One forecaster was calling for early rain clearing by late morning, (Tom Skilling), others were calling for clear skies early and showers late. After a few 6 am calls we all decide to head out to Woodstock for a good long skate; we were aiming for 50 miles. Tom was so up for it that he put in brand new bearings and never looked at a forecast. Good luck with that!

Margo and I drove up together and the windshield wipers were going for only about a third of the drive. The sky was unreadable once at John’s and fireman Larry used his extensive knowledge of the basic elements to declare, “It’s not going to rain.” Well I barely got my feet into my skates before a steady drizzle starts. Only upon our return does John tell us that as we depart a car rolls down his window to tell him we’re skating into a severe storm warning. I guess it didn’t matter because once we were out of town and skating in the severe storm I pretty much knew it. I was blinking so fast that my eyes were closed more than they were open. Pretty interesting skating downhill through a river of water with your eyes closed.

Well the rain did let up and the road pretty much dried up, except Margo then has to comment, “Hey, it’s drying up.” Just then the sky opens up and we’re back in the heavy rain. Though thankfully not torrential like before.

One thing you have to know about a skate from John’s house, you have to go uphill to get back. So no matter how far you skate, we cut our skate to only 28 miles, there is always pain waiting for you in the last miles. Today wasn’t so bad, though the wet pavement made for some tough going. All in all the company made for a really enjoyable skate. What is it about suffering with good friends in good humor? This was one of those skating events that from this writing will continue to grow in length, wind, storm surge and proximity of lightening, but that is what a good story is all about, just enough truth to keep it believable. 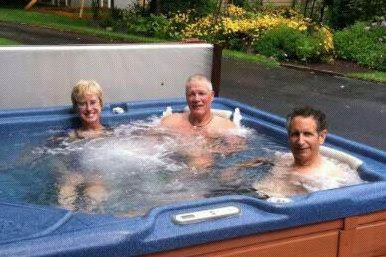 A big thanks goes out to John and his wife Deb for the hot tub and the BBQ after the skate, it made the sun coming out for the rest of the day more tolerable. I will always listen to Tommy Skillet from now on. Good skating everyone.

Posted by bobarazzi at 7:35 PM